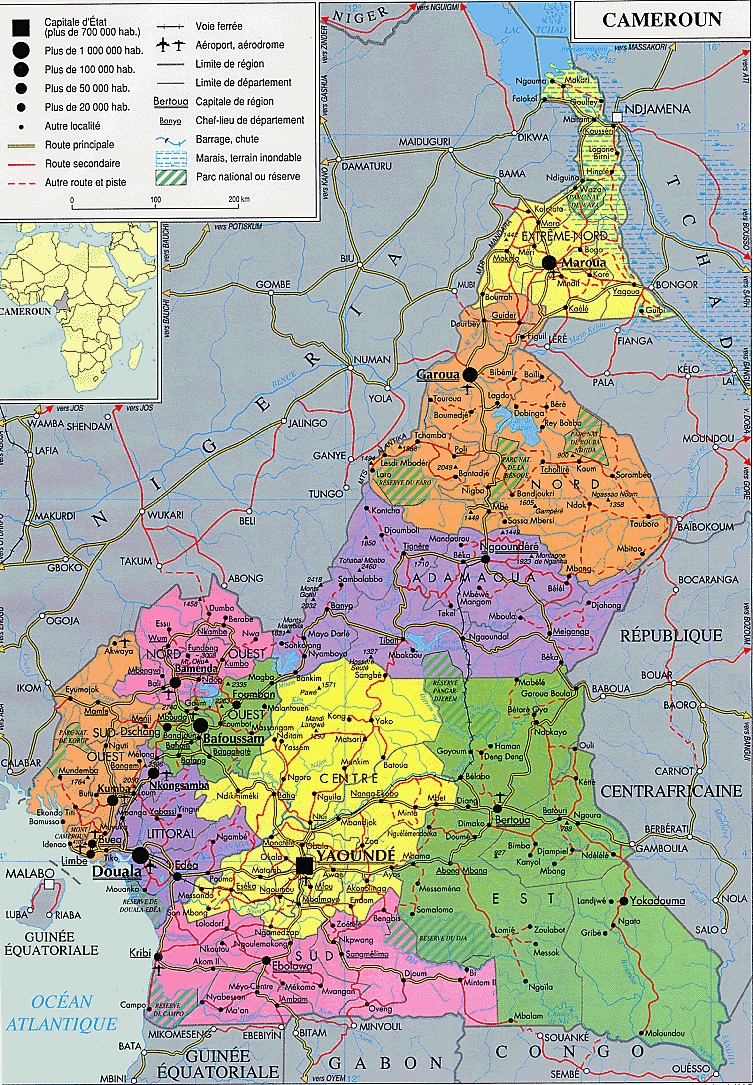 Cameroon has more than 200 ethnic groups with over 233 languages spoken and a diversity of cultural activities. There are also ecotourist potentials that can be explored from North to south and from East to West thanks to the highly contrasting landscape. Mountaineering and tourism on mountains can be practiced on the mountain ranges that are found all over the country. Safari is available where in you can visit the multitude of national parks which contain a diversity of mammals, birds and other beasts. For example, a safari could be a visit to Waza to watch animals, then back to the Northern parks like that of Bouba Ndjidah, or Korup in the South West and the Dja Fauna Reserve, a UNESCO World Heritage to admire the riches of nature.

The somewhat median position of Cameroon in Africa makes it really summarize a good number of characteristics of the continent, which is why some people often refer to her as “Africa in miniature”. From the south, dominated by the green dense Equatorial forest, there is a gradual change towards the north, dominated by the savannah and steppe vegetation. The western section of the country is dominated by both a high relief and a savannah meanwhile the littoral section has an extensive coastline marked by greyish yellow fine sands. There are also interesting aspects of the landscape marked by attractive sites, traditions and people. All these have led to different types of tourism which are practiced all year long depending on the seasons.

Cameroon has magnificent sites for sea and beach loving visitors, with about 400 km of the Atlantic coast stretching along the coastal part of the country. Kribi and Limbe towns are the highest points of attraction for tourism on the coast. From these coasts, tourists can carry out inland tourism to other destinations. In Kribi, there is an excellent beach of white sand extending over a large area with coconut trees from time to time appearing on the scenery. The contact between the ocean and the sea is also an extraordinary site to see. Another wonder of Kribi are the numerous cascades. Some are about 30 m high and have given rise to waterfalls, the most spectacular being the Lobe Fall which issues out directly into the Atlantic Ocean. A little above this area are fishing villages such as Ebounja and Ebodje where fishing activity is believed to be carried out miraculously by the villagers. From Lobe, further visits on boats and canoes will take you to the discovery of the Pygmies of the Equatorial Forest.

Limbe is closer to Douala and has a splendid site marked by Mount Cameroon which dominates the Atlantic region of Cameroon. The road linking the coast of Limbe to Douala passes along magnificent plantations of rubber, palms and bananas. The geology of the coastal area is generally characterized by large expanses of grey sand.

Thanks to the geographic location of Cameroon, there is the presence of a high diversity of most fauna and flora species found in Africa, with some that can only be found in Cameroon.

There are a number of national parks serving as a safe haven for wildlife in their natural state. These are areas of safari in which visitors can observe, take photos and feel the presence of the animals in nature.

The Waza National Park is the most popular in Cameroon and one of the most spectacular in Africa. It is located in the Far North Region and is a paradise for lions and numerous mammals like giraffes, elephants, cheetahs, leopards to name a few as well as a great colony of diverse bird species.

Besides national parks, Cameroon also has a good number of reserves and sanctuaries. The Dja and Campo are examples of great gorilla sanctuaries.

Cameroon is equally endowed with a rich cultural diversity manifested by a rich and diverse folklore, arts, habitats and ways of life. Every region has a particular folklore and music. In the south, there is the Bafia dance, Bekutsi, Assiko and others that are very much loved by poets and visitors to the region. In the West, there is the Bameleke dance. It is performed by masked people dancing in very attractive and picturesque costumes. They equally have the “Bensikin” dance. The north is a whole country of fantasia, marked by decorated horsemen in painted costumes, carrying and blowing long trumpets.

Handicrafts and arts are made throughout the country but the West and North West regions of the country are leaders in the sector. Bafoussam, Foumban and Bamenda are towns that are noted for their masks, decorated costumes, chairs created in the form of thrones, pipes, sculptures and statues. In Maroua, there is an attractive multicolour market of decorated table cloths, locally tanned leather sleepers, bags and wallets of crocodile, snake or iguana skins, bracelets, hand-made carpets and decorative objects in general. There is also a rich historical patrimony in this region marked by monuments and antiquities as well as very ancient traditional palaces.

Cameroon also has abundant potentials for ecotourism; four sites can be visited in this respect like: the Dja Reserve, the Korup National Park, the Limbe Botanical Garden and the Ebodje Village.

The Limbe Botanical Garden was created in 1892 by a German horticulturalist in a bid to cultivate certain crops which were not adapted to the climate of Cameroon. Limbe is situated in the South West Region, beside the Atlantic Ocean. Several small tracks were created in this garden to facilitate easy access by visitors who come there to admire the natural wonders and biodiversity of the site. A jungle village was created at the centre of the garden for cultural manifestations. It is also a centre for international research on biodiversity.

Ebodje is a fishing village also located at the borders of the Atlantic Ocean some 50 km from Kribi. Its beautiful beaches are a good site for lovers who can take on excursions in boats organized by fishermen. It is a regional site for the protection of marine turtles.

The Dja Fauna Reserve is a World Heritage Site declared by UNESCO since 1987. It is located in the South Region and has the richest natural fauna and flora biodiversity. It has over 1500 animal species amongst which are elephants, gorillas and chimpanzees, more than 107 mammals and a large biodiversity of birds estimated at over 320 bird species.

The Korup National Park falls amongst one of the oldest Tropical Rainforests in the world. The rich fauna in this park can be explained by the fact that this area was not totally cleared off during the last ice age. Its fauna is comprised of more than 400 bird species, 140 fish species, numerous mammals and primates. More than 400 flora species have been identified in this area, with numerous medicinal plants.

Mount Cameroon with its impressive height of 4070m is an active volcano, having a number of small rivers crisscrossing its slopes, some falling as rapids or waterfalls.

The Mandara Mountains in the North Region and the sunny landscapes of the Kapsiki present beautiful sceneries. This area is inhabited by isolated human groups of people who are animists and live totally preserved from the influence of modern civilizations. An example is the Koma people on the Alantika Mountains.

The north has distinct vegetation from the south; there is a visible change from dense forests in the south to a savannah landscape in the north. This begins with a vast expanse of lowland prairies on the Adamawa plateau (grazing zone) towards the north between Maroua and Kousseri on immense dry plains which tend to be dominated by a Sahel steppe vegetation.

Culturally, annual traditional festivals are often organized in different areas of the country; these are opportunities of seeing different traditional dances and costumes. Examples are: the ‘Ngondo’ of the coastal people, funerals of the western people, the ‘Ngoun’ of the Bamoun People which has become very popular and the Nyem-Nyem festival in the Adamawa Region.

Big towns like Yaounde and Douala with their immense infrastructure of hotels, banks, conference halls are favourable sites for international conferences and business.

There are several lodging/hosting services in Cameroon to take care of tourists. There are today more than 188 classified structures with a carrying capacity of over 7223 rooms, about 10835 beds amongst which are camping sites in national parks; 193 restaurants of international standard offering both local and foreign meals. There are also several possibilities of carrying out leisure activities like golf clubs, night clubs, bars, theatre halls and swimming pools. There are more than 50 travel agencies that are specialized in organizing tours and taking tourists to different locations; ensuring their security, nice stay and safe return.

Cameroon has three international airports that regularly serve international flights. There are equally internal flights to the nine secondary airports found in different locations. There is equally a good road network that links the major towns and regional capitals as well as principal tourist sites in the country. A railway line runs from the south to the north, moving from Douala to Yaounde and finally to Ngaoundere.

Cameroon is an ideal tourist destination in Africa and has a good record of security, except for the insurgence of the Boko Haram Islamic sect that broke out in early 2011 and the Anglophone crises that erupted in late 2016 that have jeopardised the long-enjoyed peace and security of the country. However, the situations are under control and things are returning to normalcy. The population is very welcoming to strangers and has much to offer in terms of culture, arts and behaviour. A visit to Cameroon could be equated to visiting the whole African Continent in summary. It is therefore not wrong to refer to this country as ‘Africa in miniature’.