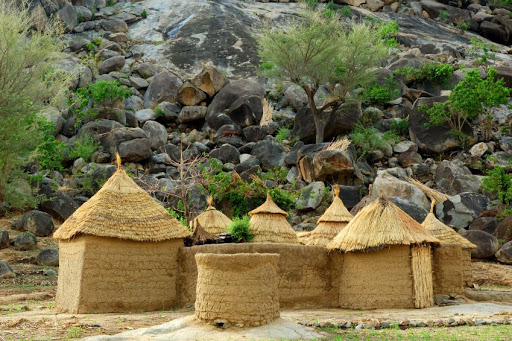 There is a high degree of social inequality. Among the Fulani, Grassfielders, Bamiléké, and Bamoun the traditional social organization included hierarchical relations between members of groups with different status (royalty, nobility, commoners, and slaves). Other ethnic groups have a more egalitarian social organization in which age and gender are the major factors in social stratification. New forms of social inequality based on access to political power and level of formal education coexist with indigenous forms of stratification. Although a cosmopolitan lifestyle has developed among the wealthy and the intelligentsia, markers of cultural distinctiveness and obligation to kin and ethnic compatriots remain. Regional differences in wealth also exist: the far northern and eastern areas have less access to wealth and infrastructure. Housing styles differ by class, in both urban and rural areas. The wealthiest people have concrete houses tiles or painted in bright colours and surrounded by high walls. Those houses have flower gardens and interior furnishings such as upholstered furniture and armoires. The poorest people live in mud houses with thatched or corrugated iron roofs, sparsely furnished with beds and stools made of local materials. Styles of dress also vary by class; the wealthiest can afford Italian leather shoes to complement their latest European and African wardrobes, while poorer people wear cloth wrappers and second-hand American and European-style clothing. The wealthiest tend to speak French or English even at home, while the poorest speak local languages and Pidgin English.