Since the 1992 amendment of the constitution, Cameroon has been a multiparty state. Executive power is held by the president, who serves for seven years and, since 1992, for a maximum of two terms. However, the constitution was again amended in 1996 to give the president an unlimited term of office. 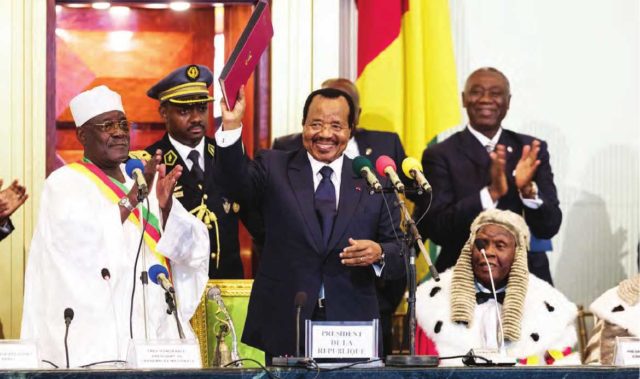 The twenty-seven-year period of single party rule left a legacy of an authoritarian political culture. At the national level, government leadership resides in the president and his cabinet. On the local level, the senior divisional officer (prefet) and divisional officer (sous-prefet) are the most powerful administrative officials. Positions in government are determined through a combination of know-how, party loyalty, and ethnic and regional background. In many areas, local and national forms of leadership coexist. For example, the chiefdoms of the Northwest and West regions form states within a state, with fons sharing power with government officials. Some chiefs served as rallying points for opposition groups during the political crises of the 1990s and the ongoing Anglophone crisis that broke out in late 2016.

There are several police forces, including internal security police, gendarmes, and military police. The legal system combines the case law system of the British with the statutory law system of the French. Theft, just like elsewhere in the world is a common crime, especially road blocks by arm bandits, and the U.S. State Department issued regular warnings about bandits in the tourist northern regions. However, the government has succeeded to get rid of these road bandits by deploring specially trained military forces known as the B.I.R on the risk zones to accompany tourists and carry out regular patrols. The sadist Boko Haram Islamic insurgences that broke out in the early 2011 has greatly threatened security in the tourist northern regions. This has warranted diplomatic sanctions to Cameroon as most embassies have placed it under the ‘red zone’ thereby forbidding their citizens from travelling to these red zone regions. However, with the deployment of the B.I.R to these regions, the government has again succeeded to push these Boko Haram Islamic rebels to the frontiers with Nigeria and Chad.

Local chiefs serve as justices of peace and receive a small monthly salary from the government. Officially, criminal law is no longer in their jurisdiction, although they often settle disputes regarding theft, trespass, and personal injury or assault via witchcraft.

Customary law combined forms of dispute resolution ranging from rituals of reconciliation to banning and capital punishment. A combination of discussion and the use of oracles are still in used in most cultures. Since the colonial era, the jurisdiction of local chiefs and councils has eroded. Informal social control mechanisms include gossip, ostracism, and fear of occult, ancestral, or divine retribution for wrongdoings.

Cameroon has a bilateral defence agreement with France. In the 1980s and 1990s, the military was involved in border disputes with Nigeria regarding the Bakassi peninsula. Since late 2016, it is confronted separatist rebels in the North West and South West regions.