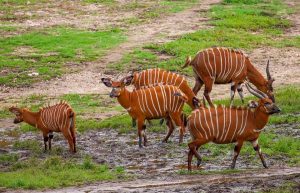 This belt regroups three administrative regions namely the East (Bertoua), the Centre (Yaounde) and part of the South region (Ebolowa). This large tourist plateau forms part of the Congo Basin forests, the second largest forests in the world made up of dense and humid tropical forests. This belt is made up of ethnic tribes such as the Bulus, Ewondos, Betis, Bene, Etons, Manguissas, Bafia, Bantus and the Pygmies. It offers a varied range of tourist products such as: