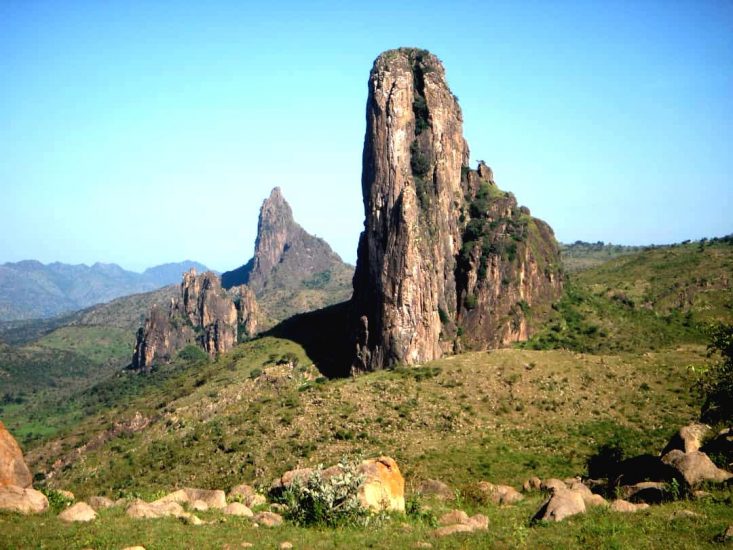 The Far North Region of Cameroon:

As its name indicates is the most northern region of the country. It is bordered to the north by Lake Chad, to the south by the North Region, to the east by the Republic of Chad and to the west by Nigeria. Culturally, it is a much diversified region with more than 50 ethnic groups, including the Kanuri, Fulanis, Matakam, Kapsiki, Guiziga, Moundang, Kotoko, Shua Arabs, etc.

The Far North Region is made up of six divisions:

The Far North Region, situated at the northern end of the country and bathed by the waters of the Lake Chad is endowed with several tourist marvels. The climate here is hot and dry, with average temperatures ranging from 26°C to as high as 32.4°C in January.

Various forms of tourism can be practiced in this region.

The western part of the region is characterised by mountainous highlands with enormous lava peaks of more than 1 000 meters. The most famous peak is the Mchigué, culminating at a height of 1 224 meters. Hiking is practiced on the Mandara Mountains, around Mora and the areas around Mogodé, Mindif and Kaélé to the South of Maroua.

Here, one can visit chiefdoms, kingdoms and lamidat:

The Oudjilla Kingdom: The Oudjilla chieftainship is a very typical local family structure. It is headed by a patriarch polygamous king who is married to 48 wives and have several hundreds of children. It is possible to organise a traditional dance executed by the chief’s spouses, if they are informed well in advance.

Other beautiful landscapes include the Kapsiki terraced plantations, enriched by the local blacksmith artists, tanners and potters of the region.

The Koza pass is a very picturesque landscape that reminds of the Texas pass.

The Djingliya handicraft center is rich in artworks and souvenirs to be taken home.

Rhumsiki is a lunar landscape constituted by a multitude of hill peaks where the sunrise and sunset are of an unbelievable beauty, attracting tourists from home and abroad. According to Andre Gide, a famous French playwright, the Rhumsiki lunar landscape is probably one of the most beautiful landscapes on the planet Earth.

In the Logone and Chari division, one can visit the sultanates of Kousseri, Logone Birni, Goulfey, Afadé and Woulki, depositories of a rich collection of Sao civilisation. Legend had it that the sultanate of Logone Birni was the cradle of Hanibal Abraham, the ancestor of Vladimir Putin, the Russian Statesman.

These are Fulani chiefdoms and the famous lamidats in the region include those of Maroua, Mokolo and Yagoua.

The Waza National Park is one of the most famous natural game reserves of Cameroon and the most spectacular in French – speaking Africa, with a surface area of 170 000 hectares.

There is also the Kalamaloué National Park, where tourists can discover a variety of wild animals with the most symbolic being the lions, the elephants, the hyenas, buffalos, buffons, gazelles, giraffes and many others.

The Mozoko Gokoro National Park is another famous reserve rich in vegetation in a rather barren and dry area.