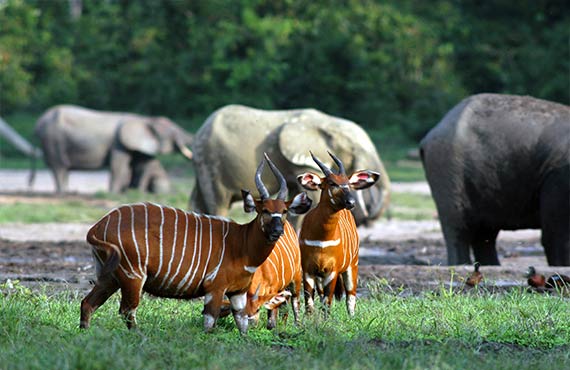 It is one of the vastest regions of country. It is bordered to the north by the Adamawa Region, to the east by the Central African Republic, to the south by the Republic of Congo and to the west by South and Centre regions. It is populated among other tribes, by the pygmies, the first inhabitants of the region who collect all their living needs in their environment through picking, fishing and hunting.

The East Region is made up of four divisions:

Also known as the “Land of the rising sun”, the East Region is an ecological zone dominated by a dense equatorial forest where some 1 500 vegetal species and more than 500 animal species are completely or partially protected, especially those in the Dja Natural Reserve, a UNESCO World Heritage site.

The average annual temperature is about 24°C. Rainfall is relatively high, reaching on average 1 500 – 2 000 mm of rains per year.

The pygmies (short people) who live from hunting and gathering in the forest have preserved their thousand – year – old lifestyle. These pleasant and welcoming people transformed their environment into a hospitable place visited by thousands of tourists every year.

This region of dense forest stands out as one of the key ecotourism destination in Cameroon. The Cameroonian government and numerous NGOs have been working hard to preserve and protect the fragile ecosystem and natural heritage from an urban influence and pollution, especially in the Dja Natural Reserve and the Boumba – Bek and Nki game reserves.

It is almost entirely surrounded by the Dja River, which forms its natural boundaries. The Dja Reserve is especially remarkable for its biodiversity and the huge variety of primates (western plain gorillas, chimpanzees), forest elephants and other mammals. It forms an integral part of the wet dense forests of the Congo basin. About 90% of its surface area remains unexploited.

It is the kingdom of numerous birds, gorillas and other mammals such as elephants, buffaloes, antelopes and many other animals that can be observed from the observatories (towers) built in the clearings at Bolo, Djangui, Ndagaye, Ngoa, Djaloumbe and the Small Savannah. The fishes in its rivers and the BAKA pygmies’ traditional festivals (dances) are some of the many attractions of the region.

OTHER RESERVES AND SITES

The Mbam and Djerem Reserve at the junction between the east, Center and Adamawa regions;

The Madouma wood, sheltering the ancient residence of Dr. Jamot;

The Nki Reserve, in the district of Ngoîla.

The game reserves in the East Region are characterised by clearings and observation towers from where tourists can observe animals and birds while taking photos. Visitors have the opportunity to photograph and take exceptional shots in the small and large savannahs, especially in the Lobeke National Park.

The Boden Falls in the district of Ketté;

The Ndong Waterfalls in the district of Ndélélé, Yota town;

The Batouri Lake, especially fitted out for angling and canoeing;

The Mokounounou Lakes, formed by a deed leg of the River Ngoko;

The banks of the Sanaga River, in the district of Belabo;

The Nki Falls, in the district of Ngoîla.

The Pandi Mounts formed by three rocks with a dense shrub on the summits, abode of a rich fauna. The biggest is identified as male and the smaller ones are identified as females;

The Marian Sanctuary, fitted out by the catholic missionaries, as pilgrimage and meditation retreat during the Assumption week;

The Mbartoua Caves, where the Baya leader, Mbartoua and his people took refuge fleeing the colonial penetration and the Islamic invasions;

The Ndélélé pond, with its impressive herd of hippopotamus, used to the presence of humans in their natural habitat;

The Lala hippopotamus pond in the district of Kette;

The gold mines dug by the villagers with rudimentary tools;

The Nika Lodges, built in 1952, to serve as stopover for the French servicemen from Central African Republic;

The Mayo pygmy’s camp, a village designed and built to settle pygmies. It is an experimental village that integrates the typical pygmies housing, modern habitat and typical forest habitat (clay);

The German Fortress, a colonial vestige presently used as a Gendarmerie office.