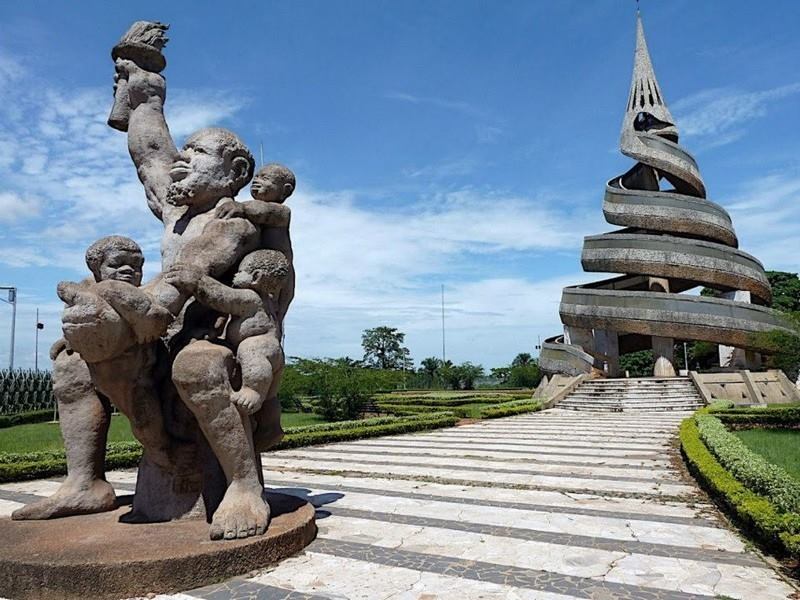 The Centre Region of Cameroon:

As its name indicates, is situated at the centre of the country.it is limited to the north by the Adamawa Region, the south, by the South Region, the east, by the East Region and the west by the Littoral and West regions

It is made up of ten divisions:

The Centre Region is remarkable by its wet climate, luxuriant vegetation, rich and diversified folklore and customs of its inhabitants. It is a hilly region, mostly covered by the equatorial rainforest and crisscrossed by many long rivers. It is suitable for excursions, picnics, ecotourism, agrotourism and adventure travel. Except for the rainy season (from July till October), the region offers throughout the rest of the year, a convenient climate for travel and leisure, with its soft and fresh climate and temperatures hovering around 22°C.

Yaounde, the administrative centre of the region, is also the political capital of the country, and the seat of the institutions of the Republic. With its world-class hotel infrastructures, Yaounde is one of the preferred destinations for tourists, businessmen, diplomats, congress participants and academics. Built on several hills, Yaounde is offered described as “the city of seven hills”. It topography make its boast of a picturesque landscape and relatively mild climate compared to the Littoral Region. Temperature ranges between a maximum of 30°C to 33°C and a minimum of around 15°C.

Yaounde, the administrative centre of the region and political capital of Cameroon is home to several places of interest for cultural, historical, ecological and religious tourists. Here, one can visit:

The Cross of Lorraine or the General Leclerc Monument, which symbolises the call for unity by the Gaullists, after the Second World War;

The National Museum or the former Presidential Palace, which was also formerly the Residence of the French Governors, build to its current architecture by Governor Marchand (1923 – 1933;

The ALCAM Building (Seat of the former Assemblée Legislative du Cameroun Orientale), where Andre Marie Mbida, first Prime Minister of East Cameroun celebrated the autonomy of East Cameroun on the 10th of May 1957;

The Statue of Charles Atangana, the last Chief of the Ewondo and Bene people, appointed by the German Kaiser in the 1940s;

The Reunification Monument, built in 1972, in memory of the reunification of the English-speaking and French-speaking Cameroons in 1961.

It is one of the major tourist attractions of the Centre Region. Situated approximately 35 km from Yaounde, on the road to Mbalmayo, the Ebogo Ecotourism Site is on the bank of the River Nyong, fitted out for forest strolling and canoeing to contemplate nature, especially the many species of butterflies. On the road leading to the Ebogo Village, one can visit the basket craftwork and traditional musical instruments workshops, made of pieces of sticks mounted on calabashes.

This park is situated approximately one-hour drive by road from Yaounde. There are several species of monkeys (such as the baboons, hocheurs, mandrills, white-collared cercocebes, and talapoins, the tiniest monkeys of Africa), gorillas, and chimpanzees there.

Besides Yaounde and its neighbourhood, the Centre Region abounds with several other places of interest, including waterfalls, caves, cascades, rivers, etc.

It is an attractive and very famous waterfall in the district of Batchenga, named after Nachtigal, the famous explorer.

These are spectacular rapids at the edge of which is built the Presidential Residence of Ndjore, in the district of Batchenga.

Situated some 25 km from the City of Mbalmayo and about 10 km from Mbalmayo-Sangmelima road section, it is an easily flooded bank of the River Nyong, with undergrowth of mangrove swamps. In the dry seasons, the River Nyong recedes to deliver its fine white sand beaches.

The bridge and colonial buildings at the edge of the River So’o are of great touristic value.

These are rocks made up of a multitude of very specular caves, situated in the Village of Bikoe, on the road from Mbalmayo to Akono.